Today's post is a bit of a bragging session. Indulge me here.

And today she got her third PR (personal record) in a row. She was even faster than another girl on her team that their coach has been secretly encouraging her to beat.

Nerves almost got the best of her, but she rallied and put her heart into her run.

This is the same girl who last year finished last in just about every race -- both in cross country and in track. She's putting in the work and seeing significant results. Some of us could learn a thing or two from her about perseverance and persistence.

And I'm not done. I took my favorite 8-year-old to the local running store, Playmakers, for running shoes earlier today. We ended up with a pair of colorful New Balance shoes. He's been looking for any excuse to run all day.

There's been very little walking today, actually. He's convinced that he shoes are making him speedier.

He tested his theory when we took the dog for a walk. He certainly ran way ahead of us. 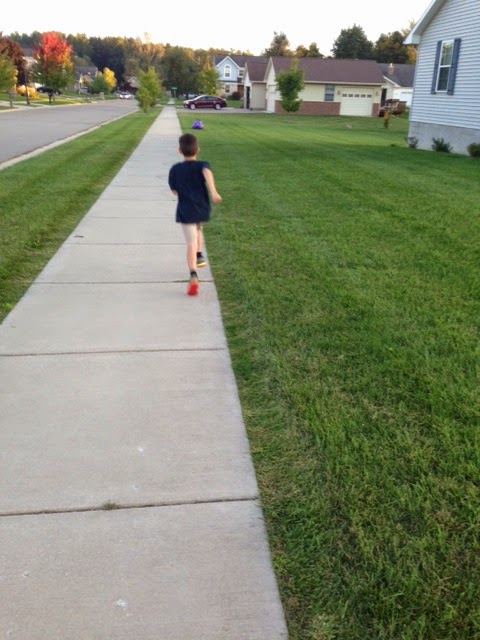 For now, I plan to take him out about three times a week and just have him run a bit more each week. In the meantime, I'll do some research and talk to some coaches to see if there's something more structured we should follow.

As with all things running, there are lots of resources online that I'll be perusing. Including this Runner's World page and this particular article.

The little that I've read so far suggests putting a goal on the calendar. I'm thinking Lansing's Turkeyman Trot 5K on Thanksgiving morning might be just the race for my little turkey.

Do you have something to brag about? Hit a new goal or just got out for a run when you'd rather have stayed in bed? Do your kids run with you? How did that happen?
Posted by Unknown at 7:23 PM