When I started this running journey two years ago, I told myself that I'd give it a try just for my daughter's sake. She really wanted to start running and I wanted to support her.

We loaded the Couch to 5K app and got running shoes. It was a struggle. I specifically remember being out of breath, looking at my phone over and over in the hope that the minute mark was close and I could stop running.

I've had other struggles. There were shin splints. There was the time I hurt my back. Oh, and the time I had the flu.

But I always came back. Slowly, yes. But with certainty that I could regain my strength and get back to running.

And then came my nemesis: piriformis syndrome, aka, the pain in my butt. A worthy adversary for sure.

Despite all that, what's probably been the best thing for my running has been not running. I've only run a handful of times since my Sept. 21 half marathon. And I've only covered a mile or two during those runs.

I geared up with trepidation and headed out the door to temperatures in the 40s, a slight drizzle and a good head wind. Ugh. 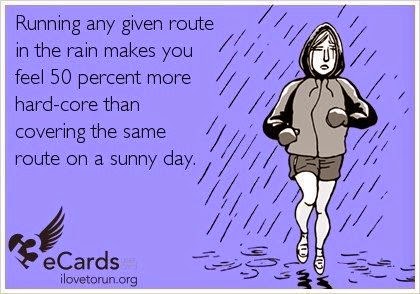 But after a short walk to warm up a bit, I ran. With zero pain.

With my boy Pitbull singing Shake Senora in my ear, I put one foot in front of the other, concentrating on my form. Posture? Check. Mid-foot striking? Check. Cadence? Need to pick that up a bit. Lean? Um. Yeah. Not so much. Maybe next time.

And then I realized I was thinking about everything but running. Not about hurting. Not about when the run would end. And most definitely not about stopping.

Dare I say that I'm back? The next week will tell. But I'm signing my daughter and I for our yearly Turkeyman Trot 5K tonight. Because there are things even pain won't keep me from.

Plus, it's followed by no-guilt pie eating. 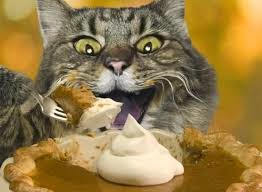 Have you come back from an injury? How long did it take? What did you do to make yourself better?

Posted by Unknown at 6:19 PM No comments: Links to this post

The key to a happy life (if you're a runner)

Metzl is a sports medicine doc affiliated with Runner's World Magazine and has a number of incredibly helpful videos, including a series of full-body exercises to help runners avoid injury.

I'm giving the series -- he calls it IronStrength -- a twirl to see if I can build the kind of gluteal muscle strength he recommends in his piriformis syndrome video.

And by giving the videos a twirl mean I tried most of the exercises a couple of sets each today with accommodations for my bum shoulder.

At this rate, I may be able to walk again by next April.

What I like about the videos is that Metzl has an athlete show exactly how to do each exercise, then tells you how many times to repeat them and for how long. He suggests several sets of 15, for about 5-6 minutes total for each series of two or three exercises.

Yeah, if I were already in shape. Maybe.

Instead, I did two sets of 10 each, skipping a few of the exercises that call for lots of shoulder work (translation: push-ups). Instead, I did wall "push-ups" with my yoga ball. Not quite the same, but still worked the same body part.

Planks is another exercise I just can't do with my shoulder (three labrum-tear surgeries will do that to you). I just went ahead and skipped those.

Since it was my first time out, I also ignored the time suggestion, but hope to build up enough strength to get up to five or six minutes eventually. Someday. Maybe.

For now, I'm focusing on what I can do and will build on that.

All of this exercise is not nearly as fun as  running, but after watching Spirit of the Marathon yesterday, I've got to say that I am inspired by Deena Kastor who is just a year younger than me and still kicking butt, even if we're now in the senior citizen, I mean, masters level.

So when I was struggling with my squats, lunges or mountain climbers, I channeled my inner Deena.

Or I looked over at my favorite 100-pound dog. 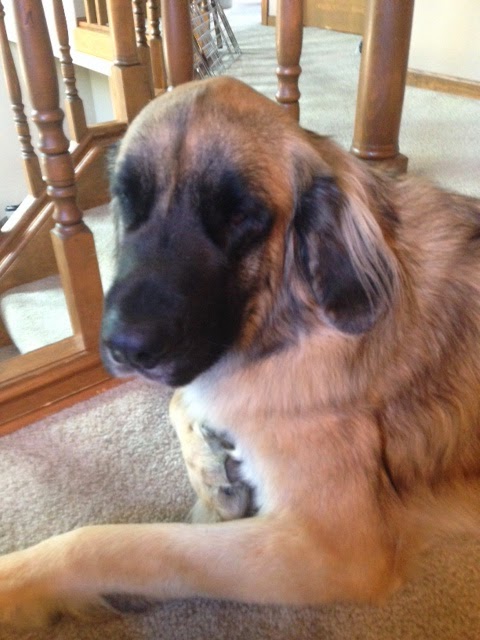 Now, how can that face not inspire one to keep going?

Who do you look to for inspiration? What kind of exercise do you do in addition to running? What's the biggest dog you've ever had?
Posted by Unknown at 1:55 PM No comments: Links to this post

Smack talking and passing the torch 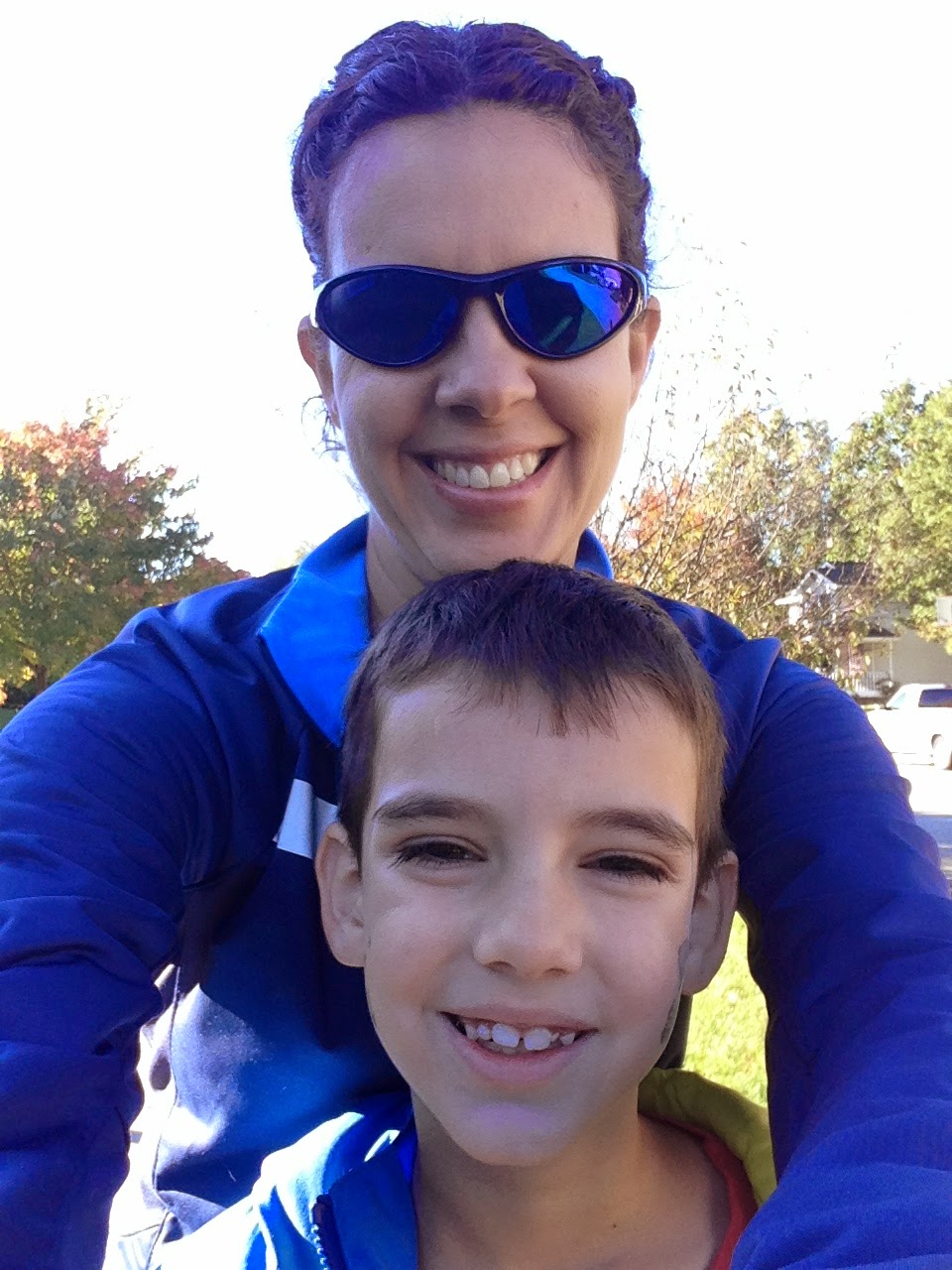 Jacket with a hood for this morning's cool temps? Check.

My favorite 8-year-old was indeed ready to go out with me this morning for what was supposed to be a half-mile warm-up before I ran a mile by myself.

I'm ramping up slowly after being sidelined by an injury, so I welcomed the company.

We walked to the end of the street, then he took off. It was humbling -- and satisfying -- to eat his dust.

We ran/walked a .6 mile route twice. I heard all about the girls who chase him at recess and the bus driver who can't seem to get them home any earlier even though we live a mile and a half from school, and planned out his Halloween costume.

"Is this really as fast as you can run?" he asked innocently during one of our walking segments. "Yeah," I answered, truthfully.

"Slowpoke!" he yelled and ran ahead again. 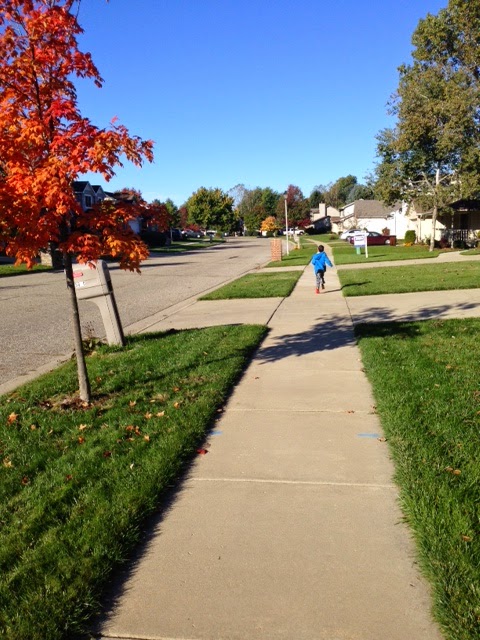 Few things are as rewarding as seeing my kids pick running over video games. Even when there's smack-talking involved.

I did go back out and ran the same route by myself, then came back for my favorite 100-pound dog for another walk around the block.  While she didn't insult me, she wasn't nearly as entertaining.

I'll take the 8-year-old out any day. We've got our eye on you, Thanksgiving morning 5K race. And we'll be ready.

Maybe by then I'll even have a good comeback.

Do you run with your kids? Do they taunt you, too? Do you have any running-related family traditions?
Posted by Unknown at 1:08 PM No comments: Links to this post

A day so good, it made Stephen want to dance

I should have known it would be a good day when I got to the sports med doc.

A new-to-me nurse was trying to get my blood pressure with the automated machine, but the thing just wasn't working.

"You looked like a runner. I should have grabbed my stethoscope. I always have to do runners' blood pressure myself."

Even better news: I've made significant progress. The stretching, yoga, rolling, sports massage, to-my-dismay-little-running approach is working. My dumb butt seems to be getting smarter.

Sports med doc also suggested I give tae kwon do another try. Say what?  I about fell out of my chair.

My first love. Reunited. But will it feel so good?

One thing I've learned after getting sidelined from running is to have patience.

I'm starting out very slow. I dug out a DVD of my former master to practice some of the basics at home. It was amazing how quickly it came back to me. I even worked up a sweat.

Could it get even better? Oh, but it does. My favorite 8-year-old suggested we go for a run. He changed his mind when we got outside, but we still spent some quality time walking around the neighborhood. Just us. And the 100-pound dog.

Yeah, it was a very good day indeed.
Posted by Unknown at 10:18 PM No comments: Links to this post