Right up until the boating incident of 2014, I was running pretty regularly again and -- while not completely healed from my pain in the butt -- I was certainly doing well enough to start half-marathon training for a late-spring event.

Right off, I was in denial about the severity of the re-injury.
Shocking, I'm sure.

But it'd been a week and the pain was still preventing me from running...or bending...or breathing...or, pretty much living my typical vida loca.

I hobbled in, a little worried about what kind of reception I would get. I mean, I've lost count of how many health professionals I've seen about this ongoing issue. And I've had a bunch of tests tone. 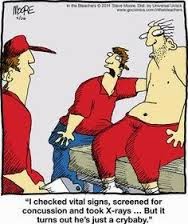 But the price was right and I visited with the nicest osteopath who confirmed the pain's probably piriformis related and treated me for it. He also recommended the doctor I'm already scheduled to see toward the end of the month, calling him the best in town. Score.

Despite the most-recent pain, I've seen enough improvement in the past two days that I'm already plotting my next run.It's not yet on the calendar, but I do have hope that it will happen sometime soon.

In the meantime, I made a small purchase at the running store as a token of appreciation for this wonderful resource.

Had I seen this there, I would have dropped a bit more money:
All injured runners should come with some sort of warning for mere mortals who come across us, don't you think?

Does your running store have an injury clinic or other helpful resources? What's your favorite running-related T-shirt saying?